When Lung Cancer Spreads To Brain?

Once cancer of the lungs begins in one place in the human body, and then it starts spreading to the other, it is known as metastasis. And when it gets to the brain, Lung Cancer Spreads To Brain would indicate that the primary lung cancer has made cancer in the brain, and this is secondary cancer.

Around 20 – 40% of adults, who suffer from non-small cell lung cancer, at some point or the other of this illness, develop brain metastases. The most frequent sites for metastases are:

How Lung Cancer Spreads To Brain?

Cancer of the lung is of two different types, and these are:

Typically, cancers of the lung spread all over the body, via the blood vessels and the lymph vessels. 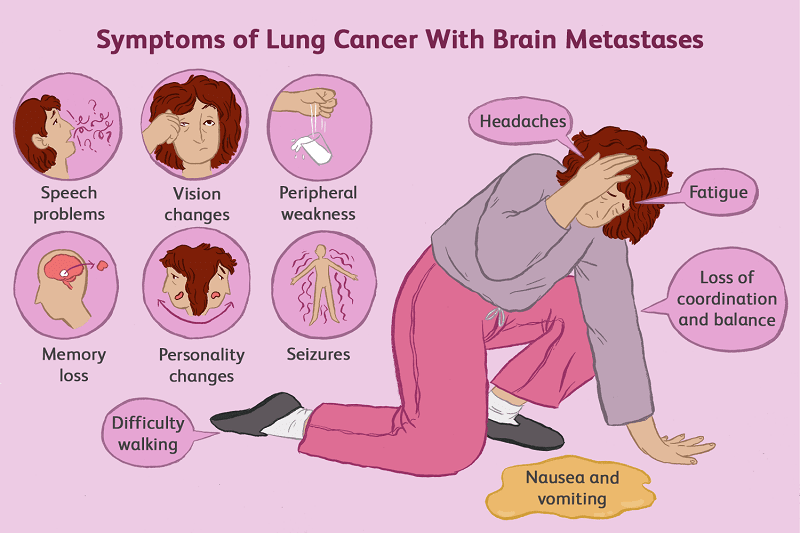 Though it is much easier for the cancer of the lung to spread via the lymph vessels, it would generally take quite some time, until the secondary metastatic cancer can get a grip. But in the case of blood vessels, it is tougher for cancer to enter. But once it does, cancer starts spreading relatively faster.

What Symptoms Indicate That The Lung Cancer Is Spreading To The Brain?

If you have been diagnosed with cancer of the lungs, it is vital that you pay close attention to symptoms that would be indicative of brain metastasis, and these would include:

If you notice you are suffering from any of these symptoms, you need to see a doctor at once.

How Can You Screen For Lung Cancer That Has Spread?

In order to get screened for metastatic brain cancer, radiology tests commonly used by doctors are:

Life Expectancy For Lung Cancer That Has Reached The Brain

Though age, ethnicity, as well as sex, could affect the survival of a person, the reality is that after a person has been diagnosed with brain metastases brought about by lung cancer, the life expectancy of the person is extremely poor.

If such a person does not get treated, the survival rate for the person is less than 6 months. If the person gets treatment, this number could increase by a bit.

For those people who get brain metastases, much after the diagnoses, their survival rate is a bit higher, as compared with those people whose lung cancer has metastasized to the brain much earlier. But, the difference is typically rather small.

The Final Stages When Lung Cancer Spreads To The Brain

What happens in the final stages, when the cancer of the lung spreads to the brain? These are the complications that arise:

When a person is in the last stages of lung cancer that has spread to the brain, all that can be done for the person is to try and optimize the quality of life of the person by means of sociological, technological, psychological, and medical considerations.

For the treatment of this type of cancer, the available options, are dependent on various factors, and these are:

Right here, you can get world-class treatment in the form of Temoside 100, Temoside 250, and Temonat 250mg.

What’s The Outlook Of Lung Cancer?

If someone you love or for that matter, you are suffering from lung cancer, it is vital to be vigilant and also to keep a close watch for symptoms of brain metastases.

In case you happen to see such symptoms, you need to see a doctor immediately and discuss with the doctor what the available treatment options are. Which could increase the chances of survival or at least, provide some comfort or increase the life quality.

Get the Best Treatment for Lung Cancer

No matter where you are in the world, you can get the best treatment for this illness, right here. And rest assured, wherever you are located on this planet, we – GenericForce, will deliver this drug to you, right to your door. For a number of years now, people from all over the globe have trusted us with their needs for world-class drugs and health care products.

why today we have gained the proud reputation as being one of the leading online mail-order pharmacies in the world. If you happen to be seeking world-class treatment for lung cancer, we – GenericForce, have just the drugs you need – Geftinat 250mg, Erlonat 150 mg, and Erlocip 150 mg.